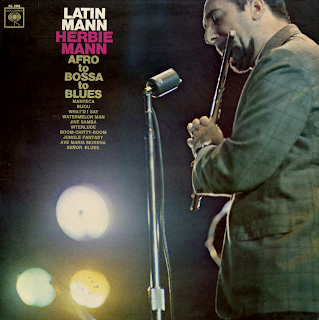 Srs. Da Vila, Diaz and Sardinis are heard as vocalists on Ave Maria and Jungle Fantasy

From the back cover: The careers of Herbie Mann and his sidemen have overlapped in many respects with those of the pioneers in the Latin Jazz story. After several years of intermittent association with the idol, Mann formed his first organized Latin-type group in June of 1959 and opened at Basin Street East (known earlier as Casa Cugat). Two of Mann's present drummers, Jose Manual and Carlos "Potato" Valdes, worked in Machito's orchestra; a third, Willie Bobo, played with Tito Puente and Cal Trader. Mann himself was inspired by the late Esy Morales to take up the flute. It was Morales' flute specialty, Jungle Fantasy, which Mann heard in 1952 (and which he recreates in this album), that became the first Latin instrumental hit in the general U.S. record market.

"Every tune in this album", says Mann, "has some relationship to the story of the gradual blending of Afro-Cuban music and American Jazz. We include a standard Cuban song, the most popular of them all in that field, Ave Maria Morena. This tune and Jungle Fantasy were recorded with three Spanish voices, bongo, conga, timbale, Charlie Palmieri on piano, Bobby Rodriquez on bass, and myself, with no regular stick drummer.

"We represent the Dizzy Gillespie-Chano Pozo tie-up with one of their greatest successes, Manteca and the Stan Kenton, Pete Rugolo Latin period with Interlude."

The latter track, incidentally, establishes a slow mambo mood that is quite different from the original Kenton treatment. Mann plays the theme very beautifully on alto flute; later, his flute and Danny Bank's bass clarinet are woven intricately into Oliver Nelson's subtle arrangement.

Bijou was one of the few Latin tunes associated with Woody Herman's First Herd, Written in 1945 by Herman's pianist and arranger, Ralph Burns, it featured Bill Harris' trombone. Though Mann is the featured soloist and a mambo feeling is added, parts of the new version bear a strong resemblance to the original.

What'd I Say is an example of the rhythmic pulse Mann describes as "boom-chatty." He explains: "What Afro-Cuban was to Latin jazz, that's what boom-chatty is to rhythm and blues. The drummers are playing their own concepts of the conga and timbale beat.

"The small band date for this album featured my regular group with Jimmy Heath added on tenor sax and Carmell Jones on trumpet. Señor Blues was another early Latin jazz hit. A lot of the jazz guys seem to feel the clave rhythm because of their heredity. Horace Silver, of course, is of Portuguese descent." Silvers' Señor Blues is played in 6/8 meter with with intriguing cross rhythms and strong solo work by Mann and Heath.

Watermelon Man, written by painist Herbie Hancock, is an example of a work by a jazzman later popularized by a Latin artist (Mongo Santamaria). The Jive Samba, says Herbie, is "like a boom-chatty version of the bossa nova." Note the solo by Dave Pike, a Mann regular since 1961 and one of the most flexible of modern vibraharpists.
Mann's summation of his own tune, Let's Boom Chitty Boom, is simply: "This is my conception of where it's at now." The closing announcement is by the leader.

As Herbie points out, a sort of Latin jazz family has developed over the past decade or so; the jazz combos interested in Latin music have often tended to trade both their Latin and jazz sidemen. Earl May, for example, Mann's bassist, worked alongside Candido Camero and Patato Valdes in Billy Taylor's combo.

Mann adds that there is a modern, adaptable brand of musician on the scene who can "go everywhere from Latin to boom-chatty to jazz." He cites his gifted pianist, Chick Corea, as an example.

The Latin jazz family is growing. Thank in large measure to Herbie Mann, it is also growing rapidly in popularity among non-Latin audiences. The Mann group's triumphant audience report at the 1965 Newport Jazz Festival will long be remembered by those of us who were lucky enough to be present.

A closing word should be added concerning the arranger who tied many of the disparate elements in this Latin Jazz story. Oliver Nelson, 33-years old and without a touch of Latin in heredity or early background, has developed into tone of the foremost all-around arrangers in modern music. Perhaps it is ironic that the basis for the success of his collaboration with a 35-year old flutist from Brooklyn should be a pocket history of Afro-Cuban and Latin-American jazz; but today, more than ever, the idioms are learning how and where to merge. All the proof you need can be found in the variegated personnel of this album – and, above all, in the colorful, sensitive, dynamic impact of the music itself.

From Billboard - September 25, 1965: The jazz flutist from Latin-Afro jazz to frug and jerk-time. The cream of the country's top musicians combine to creat an outstanding album.