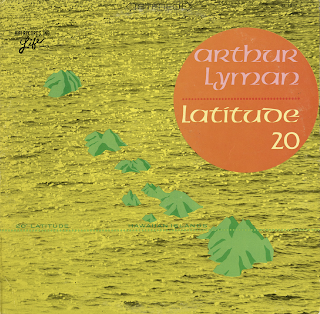 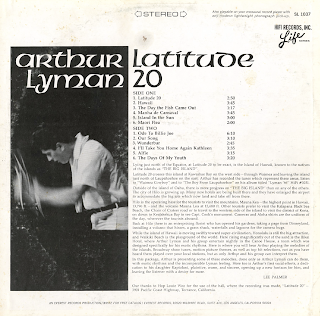 From the back cover: Lying just north of the Equator, at Latitude 20 to be exact, is the Island of Hawaii, known to the natives of the islands as "The Big Island".

Latitude 20 crosses this island at Kawaihae Bay on the west side – through Waimea and leaving the island just north of Laupahoehoe on the east. Arthur has recorded the tunes which represent these areas, listen to "Waimea Cowboy" and to "The Boy From Laupahoehoe" on this album titled "Lyman '66" HiFi #1031.

Outside of the island of Oahu, there is more progress on "The Big Island" than on any of the others. The city of Hilo is growing up. Many new hotels are being built there and they have enlarged the airport to accommodate the big jets which now land and take off from there.

Hilo is the operating base for the tourists to visit the mountains, Mauna Kea – the highest point in Hawaii, 13,796 ft. – and the volcano Mauna Loa at 13,680 ft. Other tourists prefer to visit the Kalapana Black Sea Beach, the Chain of Craters road or to travel to the western side of the island to visit the district of Kona, on down to Kealakekua Bay to see Captaincies. Cook's monument. Cameras and Aloha shirts are the uniform of the day, wherever the tourists abound.

Back at Hilo there is an enterprising florist who has opened his gardens, taking a page from Disneyland, installing a volcano that hisses, a grass shack, waterfalls and lagoons for the camera bugs.

While the island of Hawaii is moving swiftly toward super-civilization, Honolulu is still the big attraction, and Waikiki Beach is the playground of the world. Here rising magnificently out of the sand is the Ilikai Hotel, where Arthur Lyman and his group entertain nightly in the Canoe House, a room which was designed specifically for his exotic rhythms. Here is where you will hear Arthur playing the melodies of the islands, Broadway show tunes, motion picture themes, as well as top hit selections, not as you have heard them played over your local stations, but as only Arthur and his group can interpret them.

In this package, Arthur is presenting some of these melodies, done only as Arthur Lyman can do them, with exotic rhythms and the incomparable Lyman feeling. Here too is Arthur's first vocal effort, a dedication to his daughter Kapiolani, plaintive, warm and sincere, opening up a new horizon for him, and leaving the listener with a desire for more. – Lee Palmer

From Billboard - June 1, 1968: Arthur Lyman's soft and subliminal Polynesian sound is drawing patrons to Hop Louie's Latitude 20 club here. Recently departed from Honolulu, Lyman and his three associates offer a brand of Hawaiian music which is neither traditional nor modern. It's mid-ground. And it's appealing.

The HiFi Recording artists open with a medley of "South Pacific" torch-burners segue to "Return to Paradise" and then go to their favorite "Yellow Birds."

Lyman is a very deliberate vibist/marimbist. He doesn't waste a single note. His four mallets are carefully placed in softly melodic patterns, but he knows when to build in dynamics and his crescendos always coincide with his percussionist, who works standing up in the Latin timbales fashion. Lyman adds his own percussive skill on conga drums on several numbers to add a throbbing lilt behind his pianist.

The dynamic "Exodus" is a showstopper and very un-Hawaiian. Lyman involves his audience in the singalong "Tiny Bubbles" and counters that with a Hawaiian language romp through "Pearly Shells." The group's skill with bird calls is demonstrated on "Quiet Village" and the room's good sound system carries the shrill whistles and screechy voice manifestations throughout the two 250 seat rooms comprising the dinner club.

Latitude 20
Hawaii
The Day The Fish Came Out
Manha de Carnival
Island In The Sun
Maori Flea
Ode To Billie Joe
Our Song
Wunderbar
I'll Take You Home Again Kathleen
Alfie
The Days Of My Youth
Posted by By Mark Betcher at 9:24 PM