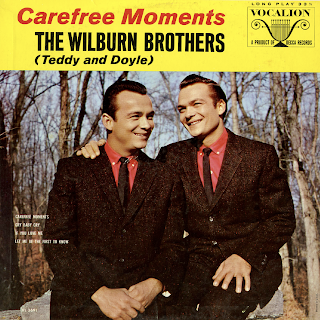 From Billboard - October 16, 1954: The Willburn Brothers, Doyle and Teddy, a regular feature of the Webb Pierce show, announced here today that they are leaving the Pierce unit November 1 to go under the personal management of Hubert Long, who also has Faron Young under his wing. The break with Pierce is entirely amicable, the brothers announced.

The Wilburn lads worked with Pierce in 1951 on the "Louisiana Hayride" out of Shreveport, La., when the army grabbed them off. They've been back with Pierce as a regular feature since January of this year. Recently they signed a Decca recording contract, being brought to the attention of Paul Cohen, Decca A&R man, by Pierce.

Their second release on Decca "Let Me Be The First To Know" and "Carefree Moments," will be out Monday (11).

Mixed Up Medley: I Told Them All About You / No Fooling' / Put Your Arms Around Me Honey (I Never Knew Any Girl Like You)
My Heart Or My Mind
I Got Over The Blues
I'm So In Love With You
Carefree Moments
Cry Baby Cry
I Wanna Wanna Wanna
Let Me Be The First To Know
Nothing At All
A Town That Never Sleeps
Till I'm The Only One
If You Love Me (Really Love Me)
Posted by By Mark Betcher at 7:33 PM