The Wizard Of Oz And Other Harold Arlen Songs - Shorty Rogers 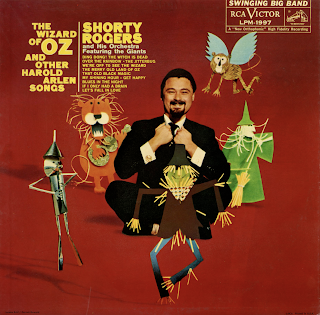 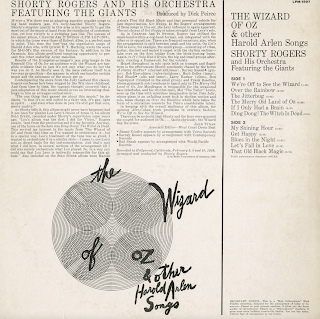 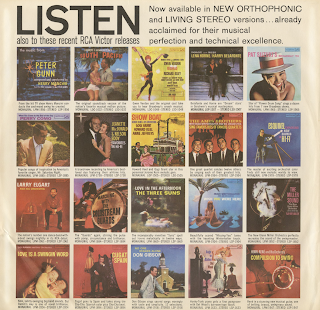 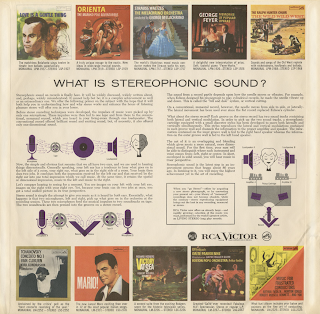 If I Only Had A Brain
The Wizard Of Oz & Other Harold Arlen Songs
Shorty Rogers And His Orchestra
Featuring The Giants
Arranged and Conducted by Shorty Rogers
Produced by Dick Peirce
Cover Photo: Jerome Kuhl - Garrett Howard
RCA Victor LPM-1997
Recorded in Hollywood, California, February 3, 5 and 10, 1959

From the back cover: Heard throughout in solo spots on trumpet and flugelhorn is the effervescent Shorty constantly chased by the horns of Jimmy Giuffre (clarinet and tenor), Barney Kessel (guitar), Bob Enevoldsen (valve-trombone), Herb Gelder (tenor), Bud Shank (alto and tenor), Larry Bunker (vibes), Don Fagerquist (trumpet in the small group) and Frank Rosolino, whose gymnastic solo trombone is heard only in The Merry Old Land Of Oz. Joe Mondragon is responsible for the occasional bass interludes, and his rhythm mate, Mel "The Tailor" Lewis, sews up the time with relentless imaginative drive. Pete Jolly, whose piano is an unfailing asset both in rhythm section and solo, takes charge on Over The Rainbow which here takes the for of a miniature concerto for Pete's considerable talent. – John Tynan - Associate Editor, West Coast Down Beat

From Billboard - August 24, 1959: A very imaginative set of arrangements, bringing a modern jazz quality to some great material including "We're Off To See The Wizard," "In The Merry Land Of Oz," "Get Happy," and "That Old Black Magic." Performances range from slightly more than one minute, to five and one-half minutes – in brief, these are not cut and dried orchestrations. For smart programming.

We're Off To See The Wizard
Over The Rainbow
The Jitterbug
The Merry Old Land Of Oz
If I Only Had A Brain
Ding Dong! The Witch Is Dead
My Shining Hour
Get Happy Blues In The Night
Let's Fall In Love
That Old Black Magic
Posted by By Mark Betcher at 3:09 PM