F# Where There Is Music - Ernest Maxin 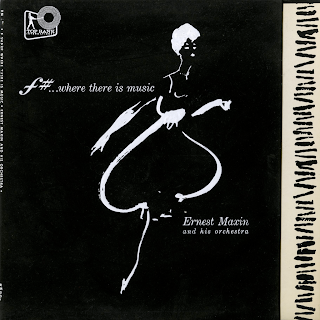 Unique book-fold jacket design features white ink printed on a black "velveteen" or "flocked" material. The front cover, right hand side, is die-cut to reveal the "key board" which is printed on the inside. There is nothing printed on the back jacket which is also covered with the black material.

From the inside cover: Maestro Maxin, at 34 is acknowledged to be among England's most gifted conductors. He is a producer for BBC-TV and has been instrumental in shaping the careers of such British stars as Dave King, Max Bygraves and Tommy Steele. But famed as he is, he still had some tall explaining to do before the lady in his life believed his tale of just-another-record-session. – Atra Baer

From Billboard - November 30, 1959: If The Billboard smells sweet this week – there's a reason for it. The reason is an ad on the back of Audition in this issue for a Top Rank album titled F Sharp... Where There Is Music," with the Ernest Maxin Ork. The printing ink used in this ad has been impregnated with a new perfume manufactured by Faberge of Paris and called (naturally) "F Sharp." The ad ties in with the Top Rank album which also has a sweet smell, since the flocked covers have been lavishly sprinkled with the perfume, even tho – as the liner notes say – the perfume lists for $27 per ounce.

Norm Weinstroer, sales chief at Top Rank, who is all hipped up with enthusiasm for the scented release, believes that the "F Sharp" LP is the history of the record business. The ad for the album in Audition is the first perfumed advertisement in the history of Billboard, which has had many firsts over the years. The Top Rank perfumed album appears to be part of a new entertainment idea, to please the nose as well as the eyes and ears. Right now the Hollywood folk are working on new odorful movie techniques called Aroma-rama and Smellovision. Weinstroer expects the music to sell the album, with the perfume working as an attention getter. But Faberge quietly hopes that the album will help them move a lot of "F Sharp" perfume during the holiday season.

Yes... even well over a half a century later... my nose can still detect a hint of "F Sharp" perfume on the cover.

As Time Goes By
Moonlight Becomes You
My Melancholy Baby
Temptation
You'll Never Know
The Very Thought Of You
Tangerine
You Made My Love You
Over The Rainbow
Laura
That Old Feeling
My Foolish Heart
Posted by By Mark Betcher at 2:53 PM