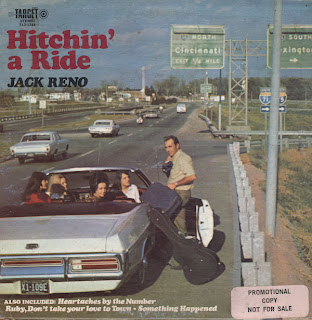 I bought this album because I noted the local (for me) freeway sign in the cover photo.

There is a "reproduction" letter printed on the back cover from John Kyl who was a U.S. Congressman from 1967-73 representing the 5th District, Iowa. The letter is addressed to a Cincinnati, Ohio P.O. Box. Basically the letter states that Kyl was glad to know Reno in Davis County, Iowa as a classmate in high school.

The title track, Hitchin' A Ride charted on American country music charts and can be found on a few compilations, but this album is somewhat obscure.