The Sound Of Sight - Ray Martin 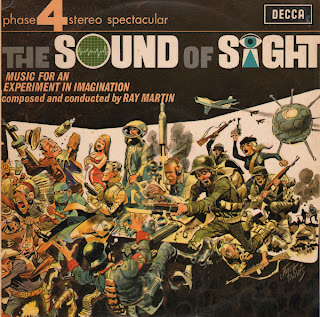 Available for purchase on combo CD with Memories Are Made of Music. So I will not be posting a sample.

The CD doesn't feature the complete Jack Davis cover illustration. So here you have it.

This album is highly entertaining. It starts off a tad slow but gets whacked quickly. The concept is to create sonic stories with orchestra and sound effects. Like a movie soundtrack without dialog. I'm not sure if the experiment was entirely successful... but the approach does present us with some "music" that reflects the playful nature of the Davis illustration.
Posted by By Mark Betcher at 1:45 PM