You Are My Sunshine - Jimmie Davis 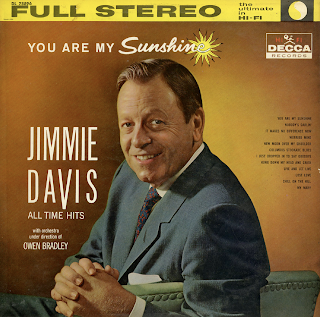 From the back cover: They are three of the nicest people you've ever met... James Houston Davis of Shreveport, devoted husband and father... former Louisiana Governor Davis, beloved by all of the nearly three million down-to-earth folks of his state... and Jimmie Davis, renowned recording star and songwriter.

Three of the nicest people rolled into one!

Jimmie, born in 1936, was one of the first artists to be signed by Decca, when the company was in its infancy. But quicker then you could say "Your Are My Sunshine" he became one of the greatest favorites in the history of Decca, or, for that matter, of any recording company.

Well known is the story of Jimmie Davis' rise from a three-room sharecropper's cabin to the governor's mansion. It was the subject of a motion picture some years ago. But what surely interests you most is Jimmie's life today. What relaxes him? What inspires him" What sparks the happiness that is so clearly in his heart as he sings for you?

Both relaxation and inspiration are Jimmie's in roaming the beautiful twelve hundred acres of his farm in Tensas Parish, 160 miles east of Shreveport. The drama of Nature, never to be fully captured by the artist's brush or author's pen, is on all sides as he surveys the scene. Young deer scamper in the thickets, roused from their hiding places by the noisy wing-flapping of wild ducks overhead. Towards the horizon, prize beef cattle amble about the green pasturelands.

Up early for the shining of a new day at sunrise... stretched out full length in the shade of a broad-leafed tree in the warmth of noontime... standing atop a rise for a magnificent view of the sunset's majesty... Jimmie bares his very soul to the whispering breezes from the nearby Mississippi, and swept away is every trace of an earthly care.

His love for roaming the farm is shared by Alvern, his wife, and their teenage son, Jim, Jr., quite an outdoorsman in his own right who was only eleven when he won his first trap-shooting championship. Together, they hunt, the fish and hike, sharing an ideal sort of companionship.

A gentle man, Jimmie Davis is truly a gentleman in every sense of the word.

"You wouldn't have any trouble convincing me," says old friend Red Foley, "that Jimmie's the one that word was invented for."

Seldom does the front cover of a record album list all of the songs within. Three of four highlights of the album are usually to seize your attention – yet this album's cover lists all twelve songs. The reason is simple. You see, seldom does an album contain an many unquestionably great hits as this!

With the music of Owen Brandley, Decca is peacock-proud to bring you the songs written and made famous by Jimmie Davis... this time, Jimmie Davis at his all-time best. – Don Richardson
From Billboard - August 3, 1959: The former governor of Louisiana handles a flock of well-known pop and c.&w. tunes, some of which he cleffed himself. Ork backing by Owne Bradley on the attractive offerings suits perfectly. This should move well in this market with some pop appeal also.

I Hung My Head And Cried
Lost Love
You Are My Sunshine
There's A Chill On The Hill Tonight
There's A New Moon Over My Shoulder
Nobody's Darlin' But Mine
It Makes No Difference Now
My Mary
Worried Mind
Columbus Stockade Blues
I Just Dropped In To Say Goodbye
Live And Let Live
Posted by By Mark Betcher at 7:20 PM