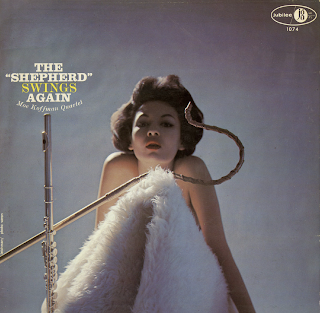 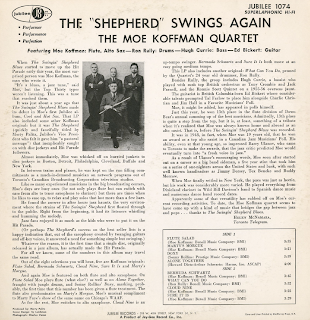 What Can You Do
The "Shepherd" Swings Again
The Moe Koffman Quartet
Produced by Marty Palitz
Cover Design by Sid Leichman
Photography by Charles Varon
Jubilee Records 1074
A Product Of Jay-Gee Record Co., Inc
Cover and Liner printed by MacMurry Press, N.Y.
1959

From the back cover: When The Swinging' Shepherd Blues started to move up the Hit Parade early this year, the most surprised person was Moe Koffman, the man who wrote it.

"It's a blues, a jazz tune," said Moe, but the Top Thirty types weren't listening. This was a tune that reached them.

It was about a year ago that The Swingin' Shepherd Blues made its debut in Moe's first Jubilee album, Cool and Hot Sax. That LP also included some other Koffman originals but it was The Shepherd (quickly and fancifully tiled by Morty Palitz, Jubilee's Vice President who felt it gave him "a pastoral message") that inexplicably caught on with disc jockeys and Hit Parade followers.

In between trains and planes, he was kept on the run filling commitments as a much-in-demand musician on network programs out of Toronto's Canadian Broadcasting Corporation television studios.

Like so many experienced musicians in the big broadcasting centers, Moe's days are busy ones (he not only plays fluted but can switch with ease from alto to tenor saxophone to clarinet) but there are times when he likes to ease up, to relax and play solos that last more than a few bars.

He found the answer in after hours jazz haunts, the very environment where the strains of The Swingin' Shepherd first floated through to the public. Right from the beginning, it had its listeners whistling and humming the melody.

Jazz fans enjoyed it as much as the kids who were to put it on the Hit Parade.

(Or perhaps The Shepherd's success on the best seller lists is a happy indication that, out of the cacophony created by twanging guitars and off-key voices, it answered the need for something simple but swinging.)

Whatever the reason, it is the first time that a single disc, originally released in a jazz album, has actually made the Hit Parade.

For all we know some of the numbers in this album may travel the same road.

Out of the eight selections you will hear, five are Koffman originals; Flue Salad, Bermuda Schwartz, Cloud Nine, Sure It Is and Marty's Morgue.

And again Moe is featured on both flute and alto saxophone. On Flute Salad Moe plays flute (what else?) as well as on Alone Together, fraught with jungle drums, and Sonny Rollin's Doxy, marking, probably, the first time that this number has been given a flute treatment. The flute also predominates on Marty's Morgue. Moe's musical compliment to Marty Faye's show of the same name on Chicago's WAAF.

As for the rest, Moe switches to alto saxophone Cloud Nine is an up-tempo swinger. Bermuda Schwartz and Sure It Is both move a an easy going medium tempo.

This LO also includes another original: What Ca You Do, penned by the Quartet's 24 year old drummer, Ron Rully.

Besides Rully, the group includes Hugh Currie, a bassist who played with such top British orchestras as Tony Crombie and Jack Parnell, and the Ronnie Scott Quintet on a 1955-56 overseas jaunt.

The guitarist is British Columbia-born Ed Bickert whose considerable talents prompted Tal Farlow to place him alongside Charlie Christian and Jim Hall in a Favorite Musicians' Poll.

Moe, it might be added, has appeared in polls himself.

Just this year, he won the 13th place in the flute division of Down Beat's annual summing up of the best musicians. Admittedly, 13th place is quite a step from the top, but it is, at least, something of a tribute when it's realized that Moe has always known home and abroad as a alto saxist. That is, before The Swingin' Shepherd Blues was recorded.

It was in 1948, in fact, when Moe was 19 years old, that he won an award as a top alto saxist in a Canadian Jazz Musicians' Poll. His ability, even at the young age, so impressed Barry Ulanov, who came to Toronto to make the awards, that the jazz critic predicted Moe Would eventually turn into "a fresh voice in jazz."

As a result of Ulanov's encouraging words, Moe soon after started out on a career as a big band sideman, a five year stint that took him on a series of one-nighters across the United States and back, with such will known bandleaders as Jimmy Dorsey, Tex Beneke and Buddy Morrow.

When Moe finally settled in New York, the pac was just as hectic, but his work was considerably more varied. He played everything from Dixieland clarinet in Wild Bill Davison's band to Spanish dance music and numerous dance band record dates.

Apparently some of that versatility has rubbed off on Moe's current recording activities. To date, the Moe Koffman quartet seems to have come up with a kind of music the bridges the gap between jazz and pops... thanks to The Swingin' Shepherd Blues. - Helen McNamara, Toronto Telegram

Flute Salad
Marty's Morgue
Doxy
Alone Together
Bermuda Schwartz
What Can You Do
Cloud Nince
Sure It Is
Posted by By Mark Betcher at 3:35 PM