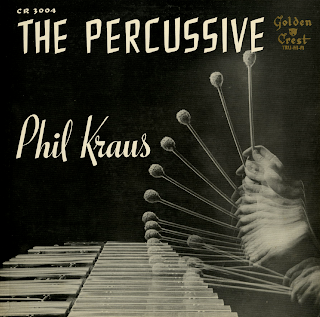 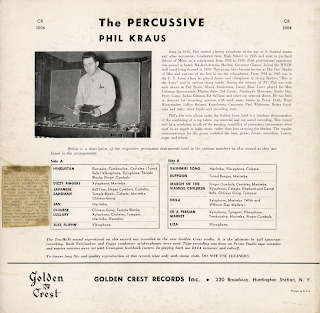 From the back cover: Born in 1918, Phil started playing xylophone at the age of 8. Studied drums and other percussion. Graduated from High School in 1935 and went to Juilliard School Of Music on a scholarship from 1935 to 1938. First professional experience was gained in hotels Waldorf-Astoria, Shelton, Governor Clinton. Joined the WNEW staff band being formed in 1939. This group later became known as The Five Shades of Blue and was one of the first to use the vibraphones. From 1941 to 1945 was in the U. S. Army where he played drums and vibraphone in Irvin Berlin's "This is the Army" and in various Army bands. During the infancy of TV, Phil was with such shows as Ted Steele, Morey Amsterdam, Lanny Ross. Later played for Max Liebman Spectaculars, Martha Raye, Side Caesar, Producer's Showcase, Studio One, Perry Como, Jackie Gleason, Ed Sullivan and other top network shows. He has been in demand for recording sessions with such name bands as Percy Faith, Hugo Winterhalter, LeRoy Holmes, Kostelanetz, Camarata, Paul Whiteman, Benny Goodman and many other bands and recording stars.

Phil's first solo album under the Golden Crest label is a fabulous demonstration of the combining of a top talent, top material and top sound recording. This record will be a revelation to all, of the amazing versatility of percussion instruments when used by an expert to make music rather than just carrying the rhythm. The regular instruments for the group include the bass, guitar, drums, accordion, Lowrey organ and celeste.

From Billboard - January 26, 1957: Any xylophone lovers among your cusomers? They might be interested in this item featuring virtuosos Phil Kraus. He pounds up quite a storm in a program of standards favorites. It has additional interest in that he is accompanied by a number of instruments not heard too often on disks, ranging from bells to Chinese gongs. Since it requires pretty wide range of equipment to get the full flavor of such instruments, the disk also might find an audience among audiophiles.