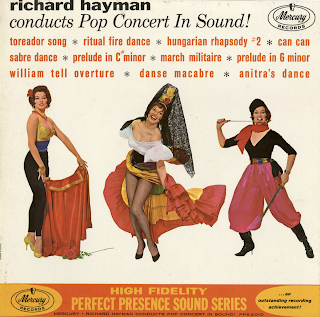 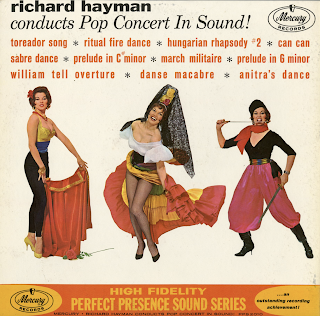 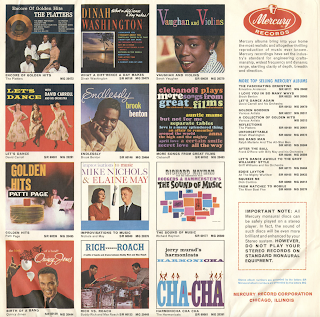 Front and back of the book-fold jacket feature the same design.

From the inside cover: Richard Hayman's career includes many facets: he is a composer, an arranger, a harmonica virtuoso, and a conductor. He has applied his wide-ranging talents to a broad scope of musical activities and he feels equally at home in a recording studio, on a Hollywood movie set, before the television cameras, or on the concert podium. In this Mercury Perfect Presence release, Hayman the conductor-arranger offers us a program of concert-hall evergreens. These arrangements reflect years of experience in the "pops" concert field. Since 1954, Richard Hayman has been a guest conductor of the Boston Pops Orchestra and has orchestrated a large number of light classical selections for Arthur Fiedler and his renowned organization. His scoring of Victor Herbert melodies in another Mercury Perfect Presence release (PPS 2007) received critical acclaim; "Richard Hayman's arrangements are perfect to bring out the last bit of excitement without sacrificing musicality." (Billboard Music Week).

Born in Cambridge, Massachusetts, Richard Hayman grew up in Winthrop in the same state. Despite his present accomplishments, he is largely a self-taught musician. While still in high school, he was writing for his own harmonica group. He joined the Borrah Minevitch Harmonica Rascals after graduation and eventually arranged all the music for the nationally celebrated group. Later, he turned to the large orchestra, producing arrangements characterized by refreshing individuality. After a stay in Hollywood, where he appeared with Vaughan Monroe as arranger and harmonica soloist. He has been musical director of a number of television programs. Finally, as a successful Mercury recording artist, Richard Hayman has gained additional prestige for his skyrocketing career.