Electronic Music From The University Of Illinois 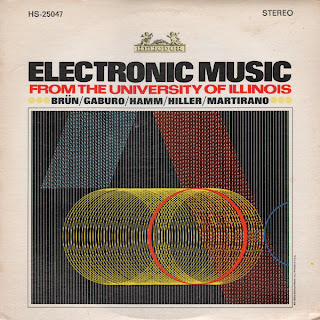 From the March 11, 1967 issue of Billboard: A far-out disk of selections by five contemporary composers with appeal to devotees of sound as well as electronic music. Herbert Bruen's "Futility" with Marianne Bruen as speaker proves a dramatic experience. Two short tape selections by Kenneth Gaburo are delights while Salvtore Matirano's "Underworld" is weird and fascinating.

You know that when you have forced a reviewer at Billboard to use words like "experience" and "weird"... that you've done something right.  I chose the track titled Underworld for my sample. If Frank Zappa wrote an electronic piece... it may have worked out a bit like this.

The album features many great tracks including, Machine Music, a piece by the Experimental Music Studio Founder, Lejaren Hiller. You can read more about the school on their website.
Posted by By Mark Betcher at 3:23 PM