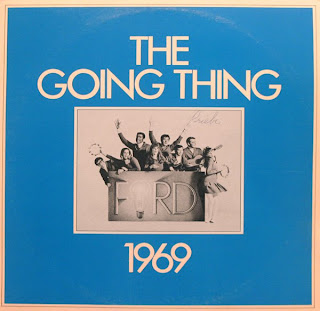 Here's a rare album. Printed on the LP label is: "CONFIDENTIAL FOR FORD PERSONNEL ONLY".

Apparently Ford management felt like connecting to the youth market with an exciting, fresh and contemporary idea... a brand new singing group, THE GOING THING. A search began for a group of young people who would symbolize "The Going Thing" concept.

Is this is how Ford management viewed the 1969 youth market? Apparently the idea worked for Ford because the kids were back in 1970 with another LP.

The jacket notes go on and on about who is in the group, where they came from and talk about their musical credits. One of the kids: Steven Flanagan was born and raised in the slums of Watts, California. A mixture of Irish, Indian and Negro, he was immediately accepted for the glee club in high school. The jacket notes also goes as far to state: THE GOING THING GROUP promises to be a welcome addition to the field of today's contemporary music.
Posted by By Mark Betcher at 4:36 PM