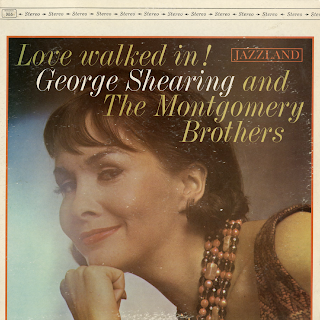 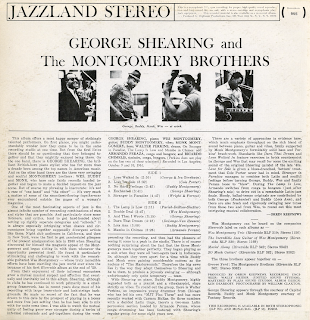 From the back cover: With Shearing on piano, Buddy Montgomery, highly regarded both as a pianist and a vibraharpist, stays strictly on vibes. To round out the group, there is Walter Perkins, an impressive young drummer from Chicago who has led his own "MJT Plus Three" and has more recently worked with Carmen McRae. On three numbers with a decided Latin tinge, there's a two-man Latin percussion section headed by Armando Peraza, whose conga drumming has been featured with Shearings' regular group for some eight years now.

Love Walked In
Love For Sale
No Hard Feelings
Enchanted
Stranger In Paradise
The Lamp Is Low
Double Deal
And Then I Wrote
Darn That Dream
Lois Ann
Mambo In Chimes
Posted by By Mark Betcher at 7:25 PM