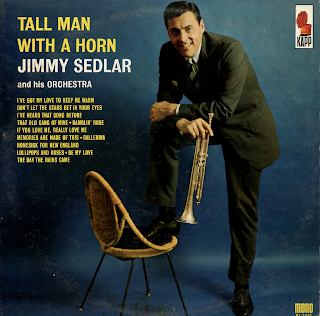 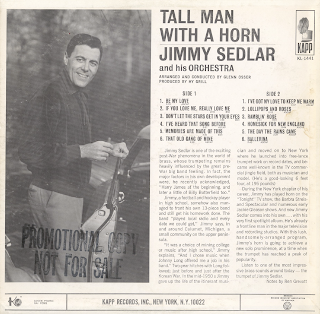 From the back cover: Jimmy Sedlar is one of the exciting post-War phenomena in the world of brass, whose trumpeting remains heavily influenced by the great the pre-War big band feeling. In fact, the major factors in his own development were, he recently acknowledged, "Harry James at the beginning and later a little of Billy Butterfield too."

Jimmy, a football and hockey player in high school, somehow also managed to front his own 13-piece band and still get his homework done. The band "played local radio and every date we could get," Jimmy says, in and around Calumet, Michigan, a small community on the upper peninsula.

"It was a choice of mining college or music after high school," Jimmy explains, "And I chose music when Johnny Long offered me a job in his band." Two-year hitches with Long followed; just before and just after the Korean War. In the mid-1950s Jimmy gave up the lire of the itinerant musician and moved on to New York where he launched into free-lance trumpet work on record dates, and became well-known in the TV commercial jingle field, both as a musician and model. (He's a good-looking 6 feet four, at 195 pounds).

During the New York chapter of his career, Jimmy has played horn on the "Tonight" TV show, the Barbra Streisand Spectacular and numerous early Jackie Gleason shows. And now Jimmy Sedlar comes into his own... with his very first spotlight album. He's already a frontline man in the major television and recording studios. With his lush, handsomely-arranged program, Jimmy's horn is going to achieve a new solo prominence, at a time when the trumpet has reached the peak of popularity. – Ren Grevatt

By My Love
If You Love Me, Really Love Me
Don't Let The Stars Get In Your Eyes
I've Heard That Song Before
Memories Are Made Of This
That Old Gang Of Mine
I've Got My Love To Keep Me Warm
Lollipops And Roses
Ramblin' Rose
Homesick For New England
The Day The Rains Came
Ballerina
Posted by By Mark Betcher at 8:05 PM