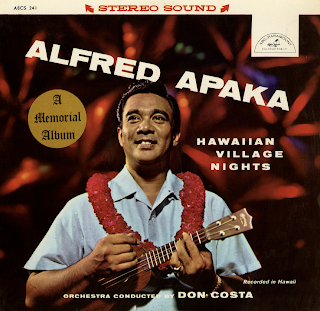 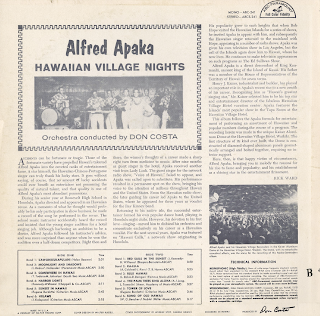 From the back cover: Accidents can be fortunate or tragic. Those of the fortunate variety have propelled Hawaii's talented Alfred Apaka into the coveted rands of entertainment fame. A star himself, the Hawaiian-Chinese-Portuguese singer can truly thank his lucky stars. It goes without saying, of course, that no amount of lucky accidents could ever benefit an entertainer not possessing the quality of natural talent; and that quality is one of Alfred Apaka's most abundant possessions.

During his senior year at Roosevelt High School in Honolulu, Apaka directed and appeared in an Hawaiian revue. As a memento of what he thought would probably he his only participation in show business, he made a record of the song he performed in the revue. The school music instructor accidentally heard the record and insisted that the young singer audition for a hotel singing job. Although harboring an ambition to be a doctor, Alfred Apaka followed his instructor's advice, and was more surprised than anyone when he won the audition over a half-dozen competitors. Right then and there, the winner's thoughts of a career made a sharp right turn from medicine to music. After nine months as guest singer in the hotel, Apaka received another visit from Lady Luck. The guest singer for the network radio show, "Voice of Hawaii," failed to appear, and Apaka was called upon to substitute. His performance resulted in a permanent spot on the show, bringing his voice to the attention of millions throughout Hawaii and the United States. From the Hawaiian radio show, the fates guiding his career led Apaka to the United States, where he appeared for three years as vocalist for the Ray Kinney Band.

Returning to his native isle, the successful entertainer formed his own popular dance band, playing in Honolulu night clubs. However, his devotion to his first love – singing – moved him to disband his orchestra and concentrate exclusively on his career as a Hawaiian vocalist. For the next several years, Apaka was featured on "Hawaii Calls," a network show originating in Honolulu.

His popularity grew to such heights that when Bob Hope visited the Hawaiian Islands for a series of shows, he invited Apaka to appear with him, and subsequently the Hawaiian singer returned to the mainland with Hope, appearing in a number of radio shows. Apaka was given his own television show in Los Angeles, but the call of the Islands again drew him to Hawaii, where he now lives. He continues to make television appearances on such programs as The Ed Sullivan Show.

Alfred Apaka is a direct descendant of King Kaumualii, ancient king of the Island of Kauai. His father was a member of the House of Representatives of the Territory of Hawaii for sever terms.

Henry J. Kaiser, industrialist and builder, has played an important role in Apaka's recent rise to a new zenith of his career. Recognizing him as "Hawaii's greatest singing star." Mr. Kaiser selected him to be his top star and entertainment director for the fabulous Hawaiian Village Hotel vacation center. Apaka features the Island's most popular show in the Tapa Room at the Hawaiian Village Hotel.

This album follows the Apaka formula for entertainment of performing an assortment of Hawaiian and popular numbers during-the course of a program. The recording herein was made in the unique Kaiser Aluminum Dome at the Hawaiian Village Hotel, Waikiki. The first structure of its kind ever built, the Dome is constructed of diamond-shaped aluminum panels geometrically arranged and bolted together, requiring no interior support.

Here, then is that happy victim of circumstances, Alfred Apaka, bringing you in melody the reasons for his rise to fame and popularity; and his establishment as a shining star in the entertainment firmament. – Rick Ward

From Billboard - February 15, 1960: Singer Alfred A. Apaka died here last Saturday (30) of a heart attack. He was 40 years old. At the time of his death he was with the Tapa Room, Henry Kaiser's Hawaiian Village Hotel. Funeral services were held February 7 at the Mormon Tabernacle with burial following at Diamond Head Memorial Park. Survivors are his son, Jeffery; Apaka Sr., and five sisters.