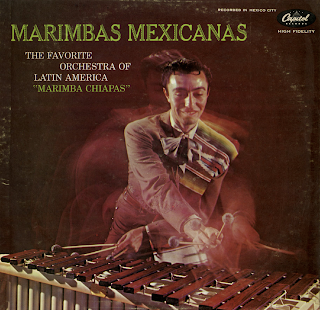 From the back cover: Chiapas is a state in the far southern portion of Mexico, inhabited by Indians who still adhere to an ages-old caste system. Its capitol city is Tuxtla Gutierrez, with 30,000 population, ten miles from the Chiapas River on the vital San Cristobal highway. Some 150 miles distant is the Guatemalan border.

It is this rugged area that the marimba is king. Native craftsmen take months to find the proper chiapaneca wood in the forests and then, slowly, they fashion the handsome planks into an amazingly true-toned musical instrument.

The musicians who comprise Marimba Chiapas have no leader – it is a purely "cooperative" group which no more frequently than twice a year rides up to Mexico City in an ancient bus to perform in theaters and make records.

A majority of the selections offered by Capitol in this unusual album are regional songs, peculiar to Southern Mexico and Guatemala.