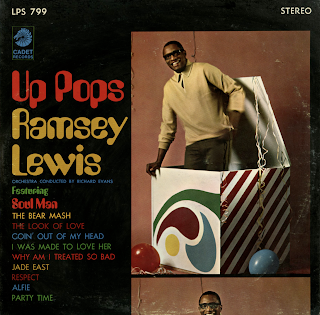 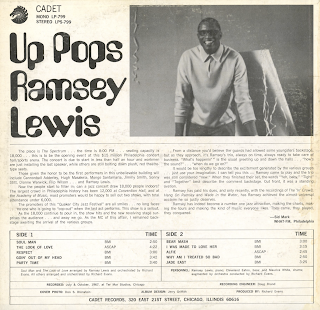 From the back cover: The place is The Spectrum... the time is 8:00 PM... seating capacity is 18,000... this is to be the opening event at this $15 million Philadelphia concert hall/sports arena. The concert is due to start in less than half an hour and workmen are just installing the last speaker, while others are still bolting down plush, red theatre-type seats.

Those given the honor to be the first performers in this unbelievable building will include Cannonball Adderley, Hugh Masakela, Mongo Santamaria, Jimmy Smith, Sonny Stitt, Dionne Warwick, Flip Wilson... and Ramsey Lewis.

Now the people start to filter in; can a jazz concert draw 18,000 people indoors? The largest crowd in Philadelphia history has been 12,000 at Convention Hall, and at the Academy of Music, most promoters would be happy to sell out two shows, with total attendance under 6,000.

The promoters of this "Quaker City Jazz Festival" are all smiles... no long faces... no one who is going to "cop-out" when the last act performs. This show is a sellout.

As the 18,000 continue to pour in, the show hits and the new revolving stage surprises the audience... and away we go. As the MC of this affair, I remained backstage awaiting the arrival of the various groups.

From a distance you'd believe the guards had allowed some youngsters backstage but as they approach, it's Ramsey's trio, always on time, always ready to take care of business. "What's happening'" is the usual greeting up and down the halls... "how's the sound?"... "when do we go on?"

It would be too lengthy to describe the excitement generated by the various groups... just use your imagination. I can tell you this – Ramsey came to play and the trio was still considered "new." When they finished their set, the words, "Yeh, baby," "Tight" and "Together" best describe the comment backstage. Out front, it was a standing ovation. – Sid Mark - WHAT-FM, Philadelphia

Soul Man
The Look Of Love
Respect
Goin' Out Of My Head
Party Time
Bear Mash
I Was Made To Love Her
Alfie
Why Am I Treated So Bad
Jade East
Posted by By Mark Betcher at 6:01 PM