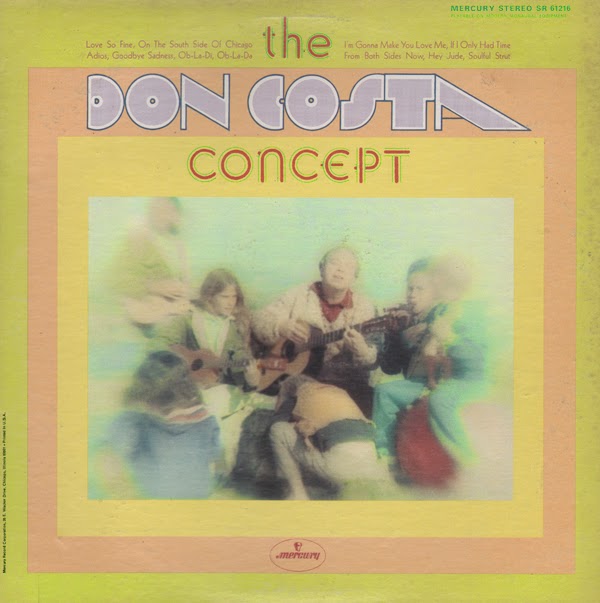 From the back cover: Two sides of a recording aren't enough for the many sides of Don Costa. Recording artist, conductor, composer, arranger, musical director – he can move in and out of these roles as easily as he can do the background music for films, yes, he does that too. "Rough Night At Jericho", "Madigan". "The Impossible Years". Yet he always emerges Don Costa, and that's what a concept is all about.

From May 3, 1969 Billboard: Don Costa has come up with a delightful and diversified collection of recent pop hits that will immediately win favor among middle-of-the-road programmers. His sensitive guitar treatments are complimented by the lush string arrangements, and he adds sparkle to such favorites…

What was the Mercury art department thinking when they designed this cover with the awful pastel colors and that bad photo of Costa? Is that a guy sitting on a rock in front of Costa tying his shoes?

Aidos
Hey Jude
Soulful Strut
On The South Of Chicago
Goodbye Sadness
Love So Fine
From Both Sides Now
I'm Gonna Make You Love Me
If I Only Had Time
Ob-La-Di, Ob-La-Da
Posted by By Mark Betcher at 10:43 AM