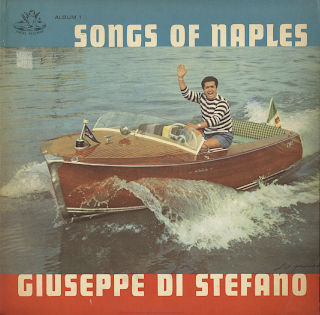 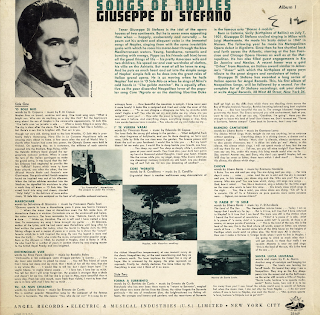 Core 'Ngrato
Songs Of Naples
Giuseppe Di Stefano
Album 1
Angel Records - Electrical & Musical Industries (U.S.) Limited
35469
1966
From the back cover: Born in Catania, Sicily (birthplace of Bellini) on July 7, 1921, Giuseppe Di Stefano studied singing in Milan with Luigi Montesanto. He made his Scala debut in 1947 in Manon. The following year he made his Metropolitan Opera debut in Rigoletto. Since then he has shuttled back and forth across the Atlantic, starring at the San Francisco and Chicago Opera Houses as well as at the Metropolitan. He has also filled guest engagements in Rio De Janeiro and Mexico. A recent honor was a gold "Orfeo" from Mantua, an Italian award similar to America's "Oscar" with which the birthplace of opera pays tribute to the great singers and conductors of today.
'O Sole Mio
Marechiare
Dicitencello Vuie
Tu, Ca Nun Chiagne!
I' Te Vurria Vasa
Core 'Ngrato
Torna A Surriento
Silenzio Cantatore
Chiove
'O Paese D' 'O Sole
Santa Lucia Luntana
Posted by By Mark Betcher at 8:36 PM