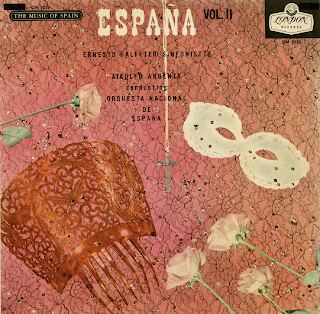 The original catalog numbers were obscured by overprinting on both the front and back of the jacket.

From the back cover: Halffer's "Minor Symphony" is the last recording conducted by Ataulfo Argenta. For this reason this record gains a new and valuable meaning. The Spanish conductor, one of the central figures amongst contemporary musicians, has a meteoric rise to fame which spread all over Europe. The principle European Orchestras knew the genius and standards of the master who disappeared while still in his youth when a future of the greatest brilliance awaited him. Rarely has such unanimous regret been felt at the loss of not just a musician, but of a person who combined minute detour with popular enthusiasm. The history of conducting in Spain closes one of the most beautiful chapters with Argenta's death, certainly that with the most world-wide resonancy in the field of recording. God has wished that this final chapter has Spanish tones of morning freshness. When the "Minor Symphony" was presented for the first time the critics in Spain and outside could not find better praises for this music so full of light and hope than the poetic and classical "Spring". – Enrique Franco