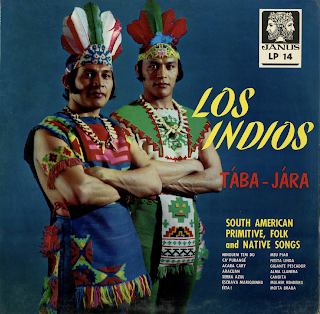 From the back cover: Quoting the world-famous guitarist Andres Segovia, "Los Indios Tabajares que tocan veritigiorosamante con dedoes ligeros y obedientes." Thus describing the unique vocal and guitar qualities that have made these primitive-born Indians from one of the innermost and remote regions of Brazil, we turn to the men themselves, Herundy and Mussapere, for a further description of their own background.

"It was in 1930 that we first had contact with white men. Our village was on the outskirts of a huge jungle and we were a tribe of about 500 indians. It was at one of our annual feasts that we heard strange noises. Some of us thought it was a sign from Heaven, others thought it had been the noise of a giant bird falling to the ground. We heard quick shots. Incited by this, our leaders began their war cry, and a small legion of Indians set out to investigate. In a clearing in the forrest, we came upon a troop of more than 100 men in uniforms. It looked as if a terrible battle would begin, but for 2 men dressed in black robes who were missionary priests and who shouted in our dialect, "Friends, Friends'."

After 2 years among the Taba - Jaras, the soldiers and priests learned the Tupy dialect, and the Indians learned some Portuguese. At their suggestion, Herundy and Mussapere, No. 2 and No. 3 sons of 30 children of one of the Taba-Jara leaders, left to seek their way in the outside world. They traveled on foot for nearly 3 years before reaching Rio De Janeiro where they gained fame singing their primitive tribal songs. After years of study of classical guitar techniques, the brothers left Brazil to travel the world as accomplished performers. They have appeared in concert at opera houses and other leading room in Madrid, Barcelona, Rome, Athens, Lisbon, Havana, Lima, Canada, Switzerland, Mexico, Peru, Venezuela, Colombia, Uruguay and the United States, where they appeared on television with Arthur Godfrey.