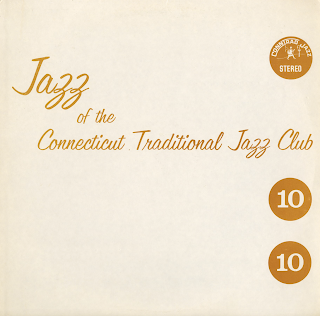 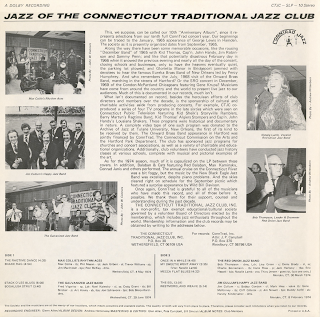 
From the back cover: This, we suppose, can be called our 10th "Anniversary Album", since it represents selections from our tenth full ConnTrad Concert year. Our beginnings can be traced to the January, 1965 appliance of George Lewis in Hamden. The society as it is presently organized from September, 1965.

Along the way there have been some memorable occasions, like the rousing "December Band" of 1965 with Kid Thomas, Cap'n. John Handy, Jim Robinson and Sammy Penn; and like that potentially disastrous February day in 1966 when it snowed the previous evening and nearly all the day of the concert, closing schools and businesses, only to have the heavens eventually quiet, the parking lot plowed, and Glorietta Manor in Bridgeport jammed with devotees to hear the famous Eureka Brass Band of New Orleans led by Percy Humphrey. And who remembers the July, 1968 visit of the Onward Brass Band, marching in the streets of Hartford? Or the SRO concert in December, 1969 of the Condon-McPartland Chicagoans featuring Gene Krupa? Musicians have come from around the country and the world to present live jazz to our audiences.