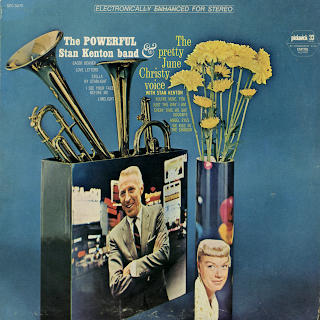 Now in its third decade, the Kenton era has contributed not only to the progress of the modern sound but it has also given the music field one of its most controversial and outspoken personalities. Stan has been called everything from a "musical fraud" to "the greatest thing that ever happened to music." Critic and columnist Ralph Gleason summed it up when he wrote, "It's hard to remain neutral about him. You either love him madly or hate him just as madly."

Equally as controversial is Stan's music. When he introduced his Neophonic Orchestra in January, 1965 at the Los Angeles Music Center, there were a variety of reactions – some called it the best thing that had happened to contemporary music in years while others said it was just a gimmick, a new name for jazz. Kenton answered: "Neophonic is not literally new, like gimmicky electronic music, nor is it a so-called Third Stream fusion of classical and jazz idioms. We are going the jazz route, we are beyond jazz."

Stan was born in Wichita, Kansas, in 1912. The Kenton moved to Los Angeles when he was three and at 10 his mother bought him his first piano. Music became Stan's one great interest. By the time he entered high school he was an accomplished pianist. He sometimes wondered whether he was invited to parties because of his personality or his ability to play. His first professional engagement came with a group of other Bell High School musicians, the Belltones. An owner of a miniature golf course hired them in an effort to attract customers. When the promotion backfired (a golf course across the street hired a louder band and attracted all the customers) the owner refused to pay the boys. The Belltones retaliated by walking off with as many golf clubs as they could hide under their pants.

By the time graduation came, the 6'4" youngster knew he wanted to make music his career. He was offered a job with a band in San Diego but lasted only a few weeks until homesickness overcame him and he returned to Los Angeles. It took several days before Stan realized that if he was going to continue in his chosen profession he would have to get used to traveling and being away from home. When the opportunity came for him to play in Las Vegas he was ready.

June Christy is a name immediately associated with jazz and worthwhile popular music all over the world. Year after year polls of jazz fans, musicians, and critics place her among the top three or four singers – to her own amazement, June insists.

When June Christy signed her first exclusive contract with Capitol Records on Dec. 13, 1945, one of the most successful recording associations in the industry began. The consistent increase and loyalty of June's fans has made hits of every one of her Capitol albums, a record which few female vocalists in the business can match.

June's combination of a husky, vaporous sound with a moody, sensitive interpretation of lyrics, has won her the descriptive accolade known to jazz buffs the world over: "The Misty Miss Christy."

June's talents are neutral ones. There is a complete absence of any musical or theatrical background in her family. Before she was five, her parents has separated and June's mother was more concerned with providing the bare necessities of life for June and her older brother than with cultivation of the arts.

June and her husband Bob Cooper live in a relaxed, modern home perched on a hillside overlooking Los Angeles' San Fernando Valley. June will tell anybody who'll listen that it's her favorite place in the world and taking care of her family is her favorite pastime. The Coopers have one daughter, Shay, born September 1, 1954.

Eager Beaver
Love Letters
I See You Face Before Me
Limelight
Stella By Starlight
You're Mine, You
Angel Eyes
Every Time We Say Goodbye
Just The Way I Am
We Kiss In the Shadow
Posted by By Mark Betcher at 8:50 PM