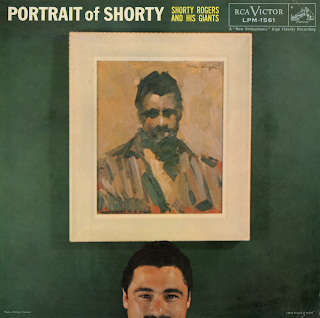 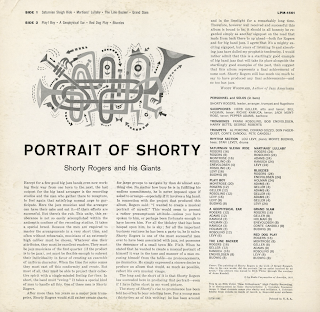 Cover: The painting of Shorty Rogers is the work of Sergei Bongart, who, in his own words, did the portrait "as an artist inspired by an artist." The picture was loaned to RCA Victor through the courtesy of Anne Kendall.

Personnel and Solo (in bars)

From the back cover: After more than ten years as a major jazz trumpeter, Shorty Rogers would still rather create charts for large groups to navigate by than do almost anything else. No matter how busy he is in fulfilling his endless commitments, he is never imposed upon if asked to arrange – especially if it involves a big band. In connection with the project that produced this album, Rogers said: "I wanted to create a musical portrait of myself." This would seem to present a rather presumptuous attitude – unless you have spoken to him, or perhaps been fortunate enough to have known him. For all the idolatry that has been heaped upon him, he is shy; for all the important business ventures he has been a party to, he is naive. Shorty Rogers is one of the most successful men ever to have been associated with jazz, yet possesses the demeanor of a small town Mr. Fixit. When he stated that he wanted to create a musical portrait of himself it was in the tone and manner of a man excusing himself from the table – no pronouncements, no dramatics. He simply expressed a sincere desire to produce an album that would, as much as possible, reflect his own musical visage. – Woody Woodward, Author of Jazz Americans
From Billboard - March 10, 1958: Excellent big band of West Coast jazz. All of the themes were written by Shorty Rodgers Several of the top Coast musicians are included in the band. Fluent solos are sparked and complemented by Rogers' distinctive contrapuntal moving chords. Rogers is heard on both trumpet and flugelhorn. Choice for those and flugelhorn. Choice for those who like the West Coast Sound. A "Save on Records" selection for March.
Posted by By Mark Betcher at 4:20 PM