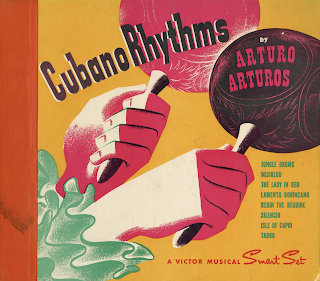 From Billboard - February 14, 1942: Backed by the rhythms of the characteristic drum instruments of the Latin Americas, this album showcases the piano playing of Arturo Arturos. Eight sides are variated to provide the rumba, Afro-Cubano, beguine and bolero rhythms, titles including Jungle Drums, Misirlou, The Lady in Red, Lumento Borincano, Begin the Beguine, Silencio, Isle of Capri and Taboo. While the setting is authentic enough and Arturos follows the melodie line nicely, there are none of those intoxicating improvisations from the melody instrument, with attending changes in the melody and mood to match the changing maze of drum beats, akin to the jam sessions of our own musicians.