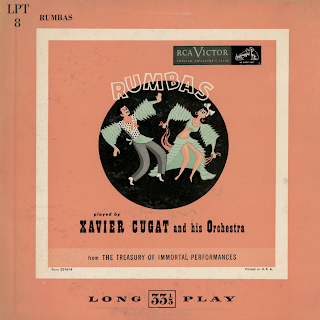 From the back cover: Watching Xavier Cugat standing before his orchestra, grinning happily and energetically shaking maracas while his men pound out a savagely rhythmic rumba behind him, it is hard to picture the same man soulfully playing a violin accompaniment while the world's greatest tenor sings a concert aria. And yet that is how Cugat, America's Rumba King, began his career – as accompanying artist to Enrico Caruso.

It began quite a number of years ago in Cugat's native Barcelona, Spain, where he was born in 1900, of a noble Spanish family. After receiving his musical education in some of the finest conservatories in Europe, Cugat was playing the violin in Barcelona when Caruso happened to hear him. The result was an invitation to come to America and tour with the great singer.

The arrangement lasted for five years, during which time Cugat toured the whole country with Caruso. During the many hours they spent on trains, between concert engagements, they discovered they shared a love of sketching and an uncommon talent for it. Caruso's impromptu caricatures of friends and celebrities, dashed off on odd scraps of paper in rare intervals of relaxation are famous. Today, the cartoons of his "pupil" Xavier Cugat, are even more famous. Cugat's first completed sketch, a merciless caricature of Caruso, amused the singer mightily.

So it was natural that when Caruso's untimely death ended the association, the young Cugat took to cartooning, on the staff of the Los Angeles Times. Unfortunately, as "Cugie" himself points out:

"When the Los Angeles Times tell you to be funny by tomorrow morning 10:30, I can't do it, so I quit cartooning and start this little band of seex man only. I haf never been in dance hall before and we play only the roomba from Cuba. Lopez, Coleman and other had played the roomba but dat was way too soon. Den you had to throw your partner in the zeiling and get a bandanna. When we start, years ago, they all look at us like we are a bunch of wild animals. They only let us play relief to those bees name band."

But not for long. The suave, continental Cugat tamed the jungle exuberance of the rumba to something Americans could and would dance. Beginning at Los Angeles' famed Cocoanut Grove, the Cugat band was soon being booked at the nation's most distinguished hotels and night spots, where it proceeded to break attendance records and be invited back year after year by delighted managements. Cugat returns yearly to New York's swank Waldorf-Astoria Hotel, and there is no record of any dancer being inspired by his music to throw his partner "in" the "zeiling" – with of without a bandanna.

The Lady In Red
Vocal refrain by Don Reid and Chorus. Recorded April 1, 1935

La Bomba
Vocal refrain by Dorothy Miller. Recorded August 7, 1936
Posted by By Mark Betcher at 6:19 AM