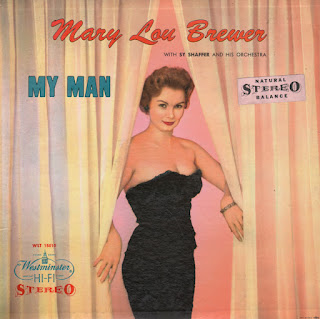 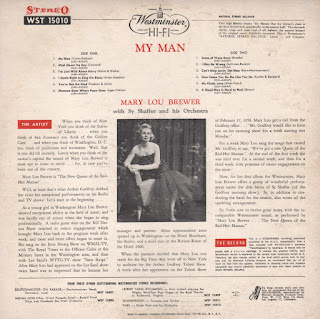 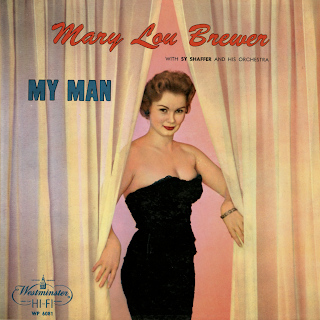 Available from online vendors, so I will not be posting a sample. Presented here to share the cover and excerpts from the jacket.

Brewer seems to have disappeared from the public eye after making this record and TV appearances as noted below. She also appeared on one 1958 episode of the Jack Parr Show.

This set is one of Westminster's first stereo releases.

From the back cover: Mary Lou Brewer is "The Queen Of The Red-Hot Mamas"…

As a young girl in Washington, Mary Lou Brewer showed exceptional ability in the field of music, and was hardly out of school when she began to sing professionally. A radio guest shot on the Bill Herson Show resulted in return engagements which brought Mary Lou back to the program week after week, and more and more offers began to come in. She sang on the Jerry Strong Show on WMAL-TV, with The Royal Tones in the Officers Clubs at the Military bases in the Washington area, and then with Les Sand's WTTG-TV show "Sans Script." After Mary Lou had appeared on the Les Sand show twice Sand was so impressed that he became her manager and partner. More opportunities soon opened up in Washington – at the Hotel Shoreham, the Statler, and solid year in the Riviera Room of the Hotel 2400.

When the partners decided that Mary Lou was ready for the Big Time they went off to New York to audition for the Arthur Godfrey Talent Show. A week after her appearance on the Talent Show of February 17, 1958, Mary Lou got a call from the Godfrey office… "Mr. Godfrey would like to have you his morning show for a week starting this Monday."

For a week Mary Lou sang the songs that caused Mr. Godfrey to say, "We've got a new Queen of the Red-Hot Mammas." At the end of the first week she was held over for a second week, and then for a third week, with promises of return engagements of the show.

Now, for her first album for Westminster, Mary Lou Brewer offers a group of wonderful performances under the able baton of Sy Shaffer (of the Godfrey morning show). Sy, in addition to conducting the band for the session, also wrote all the sparkling arrangements.

My Man
Mad About The Boy
I'm Just Wild About Harry
I Gotta Right To Sing The Blues
You're Not The Kind
Mamma Goes Where Papa Goes
Some Of These Days
I May Be Wrong
Can't Help Lovin' Dat Man
How Come You Do Me Like You Do
My Kinda Love
A Good Man Is Hard To Find
Posted by By Mark Betcher at 3:16 PM