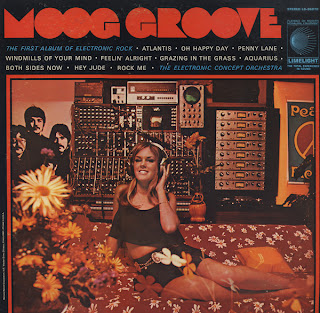 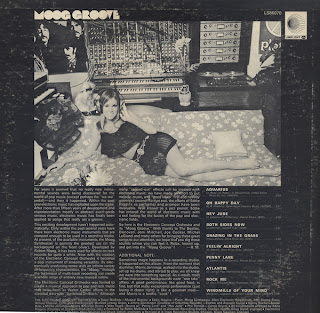 That's a massive wall of electronic hardware behind the model!

From the back cover: For years it seemed that no really new instrumental sounds were being discovered for the world of pop music (except perhaps the "wa-wa" pedal)—and then it happened. Within the past year electronic music has exploded upon the scene. After more than fifteen years of development and experimentation mostly in abstract avant-garde serious music, electronic music has finally been applied to songs that really set a groove.

This exciting development hasn't happened automatically. Only within the past several years have there been electronic music instruments that are compact enough to be used in a recording studio. At present, of the available instruments, the Moog Synthesizer is gaining the greatest use (in the background on the front cover). Developed by Robert Moog, it has been used for effects on rock records for quite a while. Now with the creation of the Electronic Concept Orchestra it becomes a pop instrument of amazing versatility. By electronically producing tones with an infinite variety of frequency characteristics, the "Moog," through the technique of multi-track recording, can create a whole range of entirely new musical colors.

The Electronic Concept Orchestra was formed to create a musical approach to pop and rock music that is as fresh as Walter Carlos' efforts in the classical area with "Switched On Bach." Although many "spaced-out" effects can be created with electronic music, we, have made an effort to put melody, music, and "good vibes" first and novelty gimmicks second. To that end, the efforts of Eddie Higgins as performer and arranger have been invaluable. Well known as a jazz pianist, Eddie has entered the world of electronic music with a real feeling for the fusion of the pop and electronic fields.

So here is the Electronic Concept Orchestra and its "Moog Groove." With thanks to The Beatles, Donovan, Joni Mitchell, Joe Cocker, Michel LeGrand and many others for bringing these great songs to our attention, we hope that you dig these sounds where you can feel it. Relax, loosen up, and get into the "Moog Groove"!

Sometimes magic happens in a recording studio. It happened on this album. From the moment that drummer, Morris Jennings, walked into the studio, set up his drums, and started to play, we all knew we were into something special. As a result, most of the instrumental backgrounds were "one take" affairs. A good performance, like good food, is fine, but that really exceptional performance (just laying it down right) is like a gourmet meal— and Morris is a terrific "cook"!

Aquarius
Oh Happy Day
Hey Jude
Both Sides Now
Grazing In The Grass
Feelin' Alright
Penny Lane
Atlantis
Rock Me
Windmills Of Your Mind
Posted by By Mark Betcher at 7:52 AM