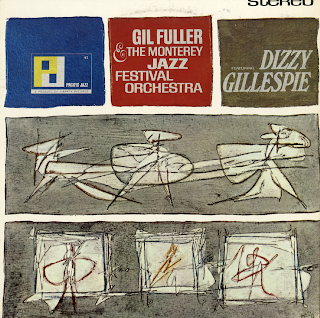 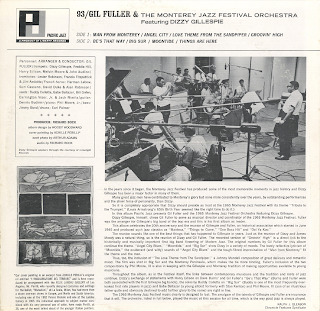 Dizzie Gillespie appears through the courtesy of Limelight Records

From the back cover: In the years since it began, the Monterey Jazz Festival has produced some of the most memorable moments in jazz history and Dizzy Gillespie has been a major factor in many of them.

Many great jazz men have contributed to Monterey's glory but none more consistently over the years, by outstanding performances and the sheer force of personality, then Dizzy.

So it is completely appropriate that Dizzy should preside as host at the 1965 Monterey Jazz Festival with its theme "Tribute to the Trumpet." (Louis Armstrong's 65th Birth Year seemed like the right time to do it.)

Dizzy Gillespie, himself, chose Gil Fuller to serve as musical director and coordinator of the 1965 Monterey Jazz Festival. Fuller was the arranger for Gillespie's big band of the bop era and this is his first album as leader.

This album celebrates the 20th anniversary and the reunion of Gillespie and Fuller, an historical association which started in June 1945 and produced such jazz classics as "Manteca," "Things To Come," "One Bass Hit" and "Ooi Ya Koo."

The reunion sounds like one of the best things that has happened to Gillespie in years. Just as the reunion of Dizzy and James Moody was a natural thing, so is the reunion of Dizzy and Gil Fuller. The recorded version of "Groovin' High" is a direct link to the historically and musically important first big band flowering of Modern Jazz. The original numbers by Gil Fuller for this album continue the theme. "Angel City Blues," "Moontide," and "Big Sur" show Dizzy in a variety of moods. The lovely reflective lyricism of "Moontide," the exuberant (and witty) sounds of "Angel City Blues" and the tough-fibered improvisation of "Man from Monterey" fit the theme and the man

Thus, too, the inclusion of "The Love Theme From The Sandpiper," a Johnny Mandell composition of great delicacy and romantic mood. The film was shot in Big Sur and the Monterey Peninsula, which makes the tie more binding. Fuller's inclusion of the two compositions by Phil Moore, III is also in keeping with Gillespie and Monterey tradition of making opportunities available to young musicians.

Throughout the album, as in the Festival itself, the links between contemporary musicians and the tradition and roots of jazz continue. Dizzy's exchange of statements with Harry Edison on Dave Burns' and Gil Fuller's "Be's That Way" (Burns and Fuller were both associated with the first Gillespie big bands), the solos by Buddy Collette on "Big Sur" (Buddy is one of the most frequently over-looked first rate players in jazz) and Gabe Baltazar (a young altoist formerly with Stan Kenton) and Phil Moore, III (son of an illustrious father quite and obviously destined to add further glory to the name) are right in line.

The 1965 Monterey Jazz Festival music clearly is designed to last. The amalgam of the talents of Gillespie and Fuller are insurance that it will. The orchestra, listed in full, played the music at this session for all time, which is the way good jazz is always played. – Ralph J. Gleason, Chronicle Features Syndicate

Also from the back cover: Our cover painting is an excerpt from Achille Perilli's original oil entitled "L'Inaugurazione Del Terrore" and is here reproduced by arrangement with the Flix Landau Gallery of Los Angeles. Mr. Perilli, who recently designed costumes and settings for the ballet, "Mutazioni," at La Scala, Milan, has had more than a dozen one-man shows in Europe, and North and South America, including one at the 1962 Venice Bienale and one at the Landau Gallery in 1965. His individual approach to subject matter combined with his very personal use of color, have made Perilli, at 38, one of the most talked about of the younger Italian painters.