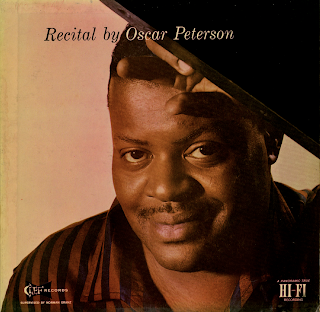 From the back cover: We have here, in recital, the piano of Oscar Peterson – and a variety of moods. Literally, of course, recital isn't quite the word since Oscar is not alone but playing in close association with two, and in three sides, three, other first-rate artists. On all except one song on the A side, Oscar is accompanied by Herb Ellis, guitar, and Ray Brown, bass. The one exception is "Willow Weep For Me" in which Oscar is backed by Irving Ashby, guitar, and Ray Brown. The first three songs of the B side feature Louis Bellson on the drums in addition to Oscar, Ray and Herb – it's the trio alone in the final selection, "The Continental."

Peterson, a native of Canada, is barely into his 30s and has established himself as one of the foremost jazz pianists of our time. He has won numerous Down Beat and Metronome polls. Herb Ellis is a Texan, a onetime member of the Glen Gray Casa Loma and the Jimmy Dorsey bands forming the Soft Winds unit and later moving on to join forces with Peterson. A native of Pittsburgh, Ray Brown had early experience with Dizzy Gillespie's small group and big band and then became a member of Jazz at the Philharmonic. Irving Ashby, out of Somerville, Mass., attended New England Conservatory in Boston and has had experience with the Lionel Hampton band and the Nat "King" Cole trio, among others. Drummer Louis Bellson is from Rockford, Ill., and has played with a number of big bands, including Harry James, Duke Ellington, Benny Goodman and Tommy Dorsey.

Pompton Turnpike
Cherokee
Willow Weeps For Me
Soft Winds
Alone Together
Simple Life
Singin' In The Rain
Love You Madly
The Continental
Posted by By Mark Betcher at 7:21 PM