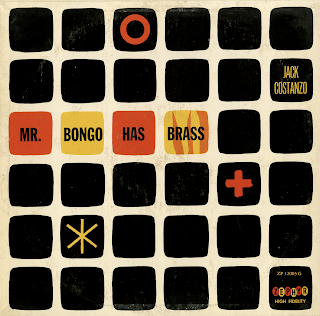 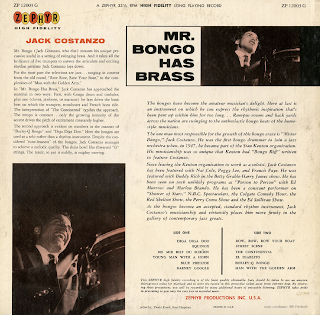 From the back cover: The bongos have become the amateur musician's delight. Here at last is an instrument on which he can express the rhythmic inspiration that's been pent up within him for too long... Rumpus-rooms and back yards across the nation are swinging to the enthusiastic bongo beats of the homestyle musicians.

The one man most responsible for the growth of this bongo craze is "Mister Bongo," Jack Costanzo. He was the first bongo drummer to join a jazz orchestra when, in 1947, he became part of the Stan Kenton organization. His musicianship was so unique that Kenton had "Bongo Riff" written to feature Costanzo.

Since leaving the Kenton organization to work as a soloist, Jack Costanzo has been featured with Nat Cole, Peggy Lee, and Francis Faye. He was featured with Buddy Rich in the Betty Garble-Harry James show. He has been seen on such unlikely programs as "Person to Person" with Ed Murrow and Marlon Brando. He has been a constant performer on "Shower of Stars," N.B.C. Spectaculars, the Colgate Comedy Hour, the Red Skelton Show, the Perry Como Show and the Ed Sullivan Show.